Why do pastures fail?

There are many reasons for pasture failure including poor establishment technique, low fertiliser maintenance, and adverse grazing management. However nothing puts pressure on perennial ryegrass like a number of drought events, combined with high pest insect numbers. This combined with the general intensity of modern farming pressures is enough to see some ryegrass pastures fail.

Are all varieties failing to persist?

No, the recovery of some perennial ryegrasses in the autumn following hot and dry summer conditions highlights that sowing ryegrasses with specific endophytes that protect the plant like AR37 endophyte and that have been bred for good grazing tolerance have survived and recovered well. Tall fescue pastures, with the novel endophyte MaxP®, have also persisted well.

Are current farm practices to blame?

It has been suggested that modern farm management is placing excessive pressures on pastures (especially during droughts), through high grazing pressure and silage being made rather than hay. As farming systems have developed, so has the grass breeding, to cope with the increase in grazing pressure. Some cultivars perform better than others under increased stocking pressure.

No. There are many different types of establishment methods but as long as paddock preparation is done correctly for the relevant establishment method, persistence won’t be affected. For all methods, residual weeds and insects must be removed before sowing new pastures. Post sowing insect and weed monitoring must be done to ensure competition pressure is minimised. The correct grazing management of the new pasture is vital in ensuring that the germinating plants survive to become established plants.

Were old varieties more persistent than the new ones?

Proprietary cultivars have been bred and tested under an extremely wide range of conditions, a large number of selection criteria and have increased tolerance to diseases, such as rust. The large number of selection criteria include; grazing tolerance, disease resistance, aftermath seedhead development, seasonal growth patterns to name a few. It is estimated that the increase in perennial ryegrass yield due to plant breeding is up to 0.75% annually, and is expected to increase at a higher rate due to the advancement of endophyte technology. White clover improvement through plant breeding is estimated to be around 1.3% annually, which is a huge lift in production.

Commodity (common) pasture cultivars have not been through the intense selection process of modern day proprietary cultivars, hence have different characteristics. Endophyte has increased pasture production immensely but standard endophyte (SE) is only available in a few old ryegrass cultivars, and provides less insect protection than AR37. Standard endophyte also suppresses dairy and sheep production. Some farmers have sourced old ryegrass cultivars with SE, but have discovered very poor persistence because much of this seed actually contains no endophyte. 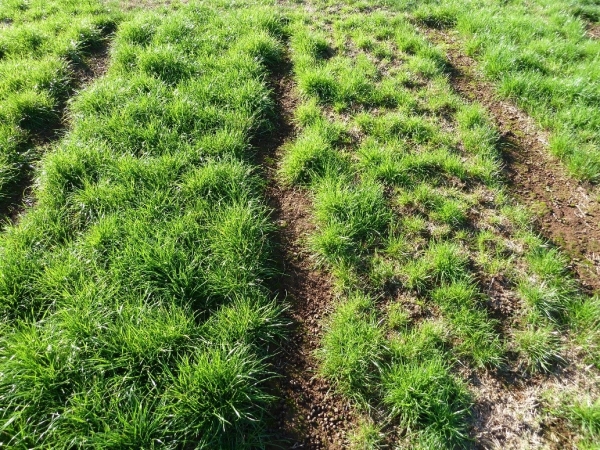 A new variety left (Halo AR37) compared to an old variety right (Victorian SE) taken May 2015 with the grass only into its third season.