When it comes to selecting what type of forage sorghum to grow there are many different options to choose from. The most commonly available are sorghum x sudan grass hybrids which are lower in prussic acid than traditional straight sorghum varieties. This creates a plant with a higher stem to leaf ratio and lower prussic acid levels allowing it to be grazed at 650 to 800mm high for optimum quality. This is earlier than original varieties, which were suitable for grazing at 800 to 1200mm high.

Other aspects to consider are the maturity of the variety and whether or not it carries the Brown Mid Rib (BMR) gene.

Stuart Rowsell operates a 50 hectare irrigated sheep and fodder operation near Gunbower in northern Victoria and has been using FeedEx forage sorghum for the past five years. Mr Rowsell has found FeedEx to be an impressive summer forage option for grazing and additional silage production. His sheep perform exceptionally well when grazing on FeedEx, achieving a high level of feed utilisation. “The quick recovery of FeedEx from grazing is also very impressive and allows us to have an average of four grazing periods per season,” he said. “We have found that if we can get the crop sown by early November, we’re able to graze it as soon as mid-December.” Mr Rowsell has also found he can grow more feed with FeedEx sorghum than millet, with less water.  “The water use efficiency of forage sorghum is very appealing,” Mr Rowsell said.
“With FeedEx, we have the potential to grow 1.5 times more feed than millet, while using three quarters of the water.” 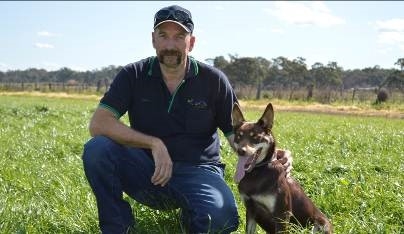 Stuart Rowsell with his dog Buddy 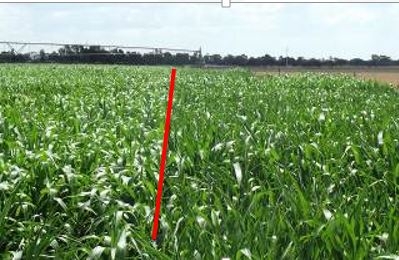 Troy Alexander has trialled BMR Fuel at his farm in Finley. BMR Fuel shown on the left
Maturity or flowering date is the main driver behind a varieties speed of establishment and time to first grazing. If a grazing system requires a quick bulk of feed then an early maturing sorghum x sudan such as FeedEx forage sorghum is an excellent option. FeedEx has a flowering date of 67 days making it fast establishing and allowing grazing in 42 to 49 days. This fast establishing nature of FeedEx makes it a good choice for dryland sowings to ensure a safe grazing height is achieved. To achieve optimum nutritional quality and avoid the risk of prussic acid poisoning FeedEx should be grazed at 650 to 800mm high and down to a post grazing residual of 100 to 150mm to allow for optimum regrowth potential.

If a later maturing, lower fibre, highly digestible summer forage is more suited to your system a variety carrying the BMR gene would be more suitable. Sorghums which carry the BMR gene are lower in structural fibre (lignin) therefore elevating the digestibility of the forage, leading to a possible increase in animal performance. Stephen Pasture Seeds have an exciting new BMR sorghum variety available this season. BMR Fuel® which has a flowering date of 79 days and is suitable for fuelling animal performance over the summer months.

Troy Alexander from Finley in the NSW Southern Riverina, trialled BMR Fuel® alongside a current market leading variety, and found it was 7 days quicker to grazing than the current variety he was using. Both varieties were sown in the first week of November (2014) and grazed from the second week of December. Troy commented that “given the new BMR Fuel® reached grazing 7 days earlier I would be able to get a 5th grazing out of it by the end of the season”.