Break crops are used in cereal rotations as they “break” the life cycle of the crop specific pathogens and pests, by growing a non-host crop. This reduces disease and pest pressure for the following crops. Using different crops in a rotation also allows alternative herbicide options to be used, which can improve weed control and reduce weed seed banks. Using legumes as break crops provides these advantages, as well as providing nitrogen to the soil system. Following crops will benefit from this added nitrogen, and fertiliser costs may be reduced.

Legumes as break crops
In recent years, grain legumes have become more popular options to include in a cropping rotation, however pasture legumes also have an advantageous fit. Using a pasture legume not only benefits the soil and future crops, but it can also be beneficial for livestock as well. Legumes are highly digestible and higher in protein than grasses or cereals, therefore legumes provide high quality feed for stock. Annual legumes grown in cropping rotations can provide valuable livestock feed as part of a mixed species pasture or as a pure legume stand to be grazed or cut for hay. Vetch and annual medics are suitable legume options and worth considering as part of your cropping rotation. 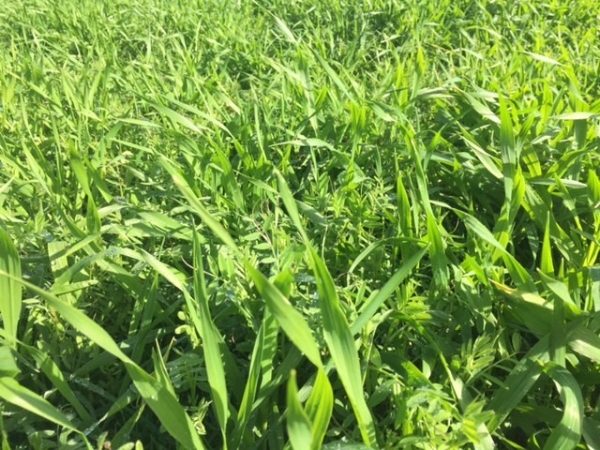 Benatas Vetch in a mixed pasture

Grazing vetch and annual medics
Vetch can be grazed by livestock either early in the season as a green pasture or late as a dry forage. Vetches do not recover well from grazing so it is best to grow them as one large feed wedge then graze once. Like vetch hay, grazing vetch provides high quality feed for livestock. However, it is important to note that vetch infected with rust should not be grazed or cut for hay/silage as if consumed, may cause abortions in pregnant livestock.

In low rainfall areas annual medics are a valuable species in pasture mixes, especially with lucerne and in more recent times the inclusion of Uplands Hispanic cocksfoot. Medics provide high quality forage during autumn, winter and spring for grazing livestock. They are self-regenerating plants and persist in pastures even in tough seasons due to their hard seed levels. Blue green and spotted alfalfa aphids can kill or seriously reduce the production of medics, hence selecting an aphid tolerant variety is advised. Because livestock readily eat medic seed pods, medic pastures should be managed to allow seed set in their first year.

Green manuring benefits of medics and vetches
Vetch and annual medics are also commonly grown as a green manure crop. Forage vetch types and medics can produce large amounts of dry matter, which fix high levels of nitrogen and improve the soil profile when manured. Green manuring improves soil physical, chemical and biological properties which results in improved yields of following crops (Fageria, 2007). It is recommended that green manure crops are sprayed out in the middle of spring. Spraying out the crop with a non-selective herbicide also doubles as an opportunity to kill weeds before they set seed. This reduces the weed seed bank and problem weeds in following crops and is a valuable tool in managing herbicide resistance. Green manuring provides the most cost effective benefits if used once in every five to six years in intensive cropping rotations.

Vetch & Annual Medics
Vetch and medics are suitable break legume crops grown to restore soil fertility and break the disease cycle of cereal crops. Vetch and annual medics are multi-purpose winter crops with many end uses. Vetch can be used for grain or hay production, grazing or as a green manure crop. Medics can also be used for hay production and green manuring as well as in a pasture for forage production. Vetch and annual medics’ tolerance to low rainfall (300mm+ annually) is highly advantageous in areas where other legume crops are less suited. Vetch is adapted to a wide range of soils from light sand to heavy clays (Matic, 2015). Most medics are best suited to neutral to alkaline clay to clay-loam soils, however, there are some sub species which are tolerant of acidic conditions. Some annual medics also have a particular fit in cropping rotations due to their sulfon urea herbicide tolerance.

When selecting a variety of vetch or medic, climatic conditions, soil types and end use should be taken into consideration. Sowing rates vary between common, woolly pod and purple vetch varieties and depend on the end use but range between 25-65kg/ha. Medics are commonly sown between 3- 7kg/ha when sown alone and between 2- 5kg/ha when sown in a pasture mix.

Vetch Grain production
There are limited grain legume options for farmers in low rainfall areas of southern Australia. Vetch can produce large amounts of seed and can be grown for grain harvest in these areas. There are grain specific varieties of vetch, which can produce similar yields to peas in dryland situations. Some varieties, such as Morava and Rasina, have low grain toxin levels and can be used as part of livestock grain rations to increase protein levels of the diet. Disease management is very important when growing vetch, regardless of the end use, therefore growing disease resistant varieties where possible is advised.

Vetch and medic hay and silage production
When sown alone, vetch and medics can produce high quality hay and silage. This can be useful to a farming system by providing a high quality supplementary feed. Popany and Benatas vetch varieties are highly suitable for hay and silage production as well as grazing. Vetch hay should ideally be cut at the flowering to early podding stage, for the best quality and quantity of hay (Matic, et al, 2008). If cut around the optimal time, vetch produces high quality hay with an average dry matter digestibility of 60-75%, average metabolisable energy (ME) value of 10.4 and an average crude protein (CP) percentage of 18.6% (Dear, et al,2005). Snail medics are the most suitable hay producing medic due to their erect nature. Like most plants, digestibility and protein levels of medic decline with maturity. Digestibility of medic hay range between 55-80% and CP ranges between 12-20% (Dear, et al, 2005). However medics remain palatable to grazing livestock at all stages of growth, even late in the season when leaves, stems and seed pods are dead.