Barley for feed or beer?

Barley has been around for centuries and has largely been used for feeding cattle. Over the past few years however we have seen an increase in a secondary section of the market, beer and malt production.

When it comes to choosing a variety of barley, your first thought should be, what will the end use be?

Or, are you be aiming to produce a malt grain variety suitable for the beer production market?

For a bit of history, as of the end of 2017, Australia produced (on average) around 2.3 million tonnes of malting barley and 6 million tonnes of feed barley. The average Australian malting selection rate is the highest of the world's exporting nations with around 30-35% of our barley national crop selected as malting quality.(1)

Barley has the ability to be more tolerant of drought and being sown into saline soils than other cereal crops, which may make it one of the better options this season with low rainfall in many parts of the country. It can also be sown with field peas for a greater yield as a high protein forage/hay if cut with about 40% moisture retention.

Soil nutrition wise, it is important to take into account your paddock history and consider what crop you are following with barley, was it a high yielding crop? If so, the soil may be suffering from a depletion of Nitrogen (N) and a follow up of an application of N may be necessary. If however, you are following from a green manure crop then this may not be required. Historically though in Australia, barley has predominantly been used as a late rotation option after canola and wheat. 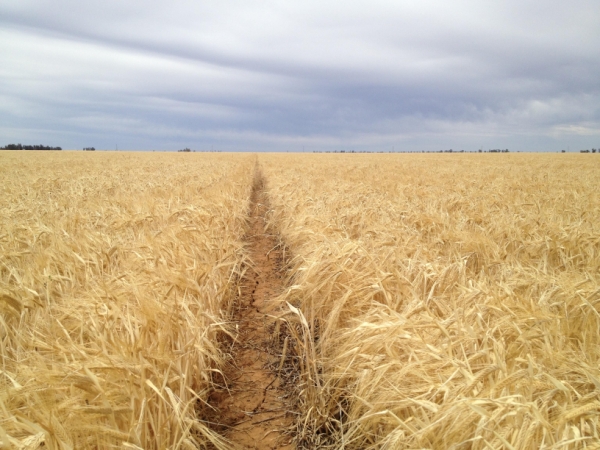 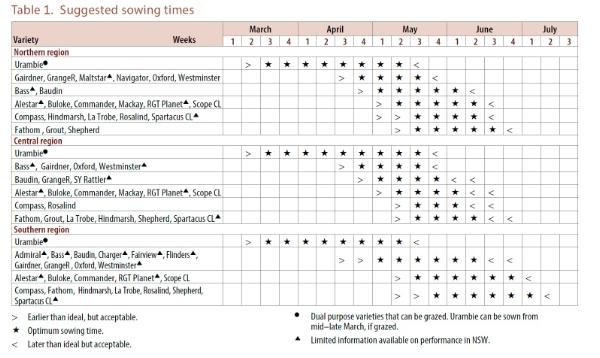 There are three types of barley that can be grown:

The DPI Winter Crop Variety Guide 2018 details variety differences. Sowing times for the barley varieties available this year are shown on Table 1. Varieties are compared by regions and as you can see the majority of varieties are sown in May to early June, which will then give producers an expected single harvest in late October to early November. It should also be noted that when it comes to variety selection, there are differences in vernalisation and genes to consider. Grazing barley during the season prior to grain harvest, does reduce the grain harvest as barley tends to go reproductive after initial grazing.

What is the nutrition value of barley vs. oats/wheat and other cereals?

What is the nutrition value of barley vs. oats/wheat and other cereals?

Referring to Table 2, in the diets of beef cattle, barley grain is mainly utilised as an energy or protein source and although the nutrient content (TDN%) does seem slightly higher compared to field peas, it is very similar to that of corn, oats, wheat and sorghum (NDSU, M. Bauer et. al., Sept 2017) which may be partially due to its higher fibre content. The crude protein content of barley is higher than in corn and similar to wheat and oats, but lower than in field peas. Although not shown, the mineral content across all cereals can differ greatly, depending on soil fertility, environmental conditions and geographical location. However they all seem to be deficient in Calcium (Ca) compared to other minerals which may mean the use of a Ca supplement is needed in a high grain diet in cattle.

Should I feed the grain whole or processed?

Barley is an excellent high protein addition to forage based diets and can improve weight gain in weaner calves and as a supplement in gestating beef cows fed a low quality forage. For barley to be digested readily in ruminant diets, it is better to be fed after some sort of processing, for example, dry/steam rolling or tempering, rather than fed as a whole grain, as digestibility and availability in ruminants seems to be as high as approximately 80% when processed compared to around 50% with whole grain digestibility in cattle (with many of the whole grains found in manure in paddocks).
In finishing rations for cattle, barley can be used as the sole grain however it is probably best to blend more than one grain, not only for improved palatability but also for more stable rumen digestion which results in a consistent intake from livestock.

What about malt varieties and beer production?

What about malt varieties and beer production?

When it comes to malt production varieties, the key is research. Really do your homework well on what varieties are marketable and pay attention to those that are not readily purchased and that are only used through a closed loop arrangement.

There is a lot involved in growing a malt barley for beer production.

First and foremost, it is important to grow a malting variety that has been accredited by Barley Australia, like LaTrobe, Commander or Westminster. For the latest accredited varieties, please check the Barley Australia website (click here)

What is important when producing a malt barley?

Whether a barley malts or not depends on crop management, crop history and nutrition. Agronomic information relating to the production of malt barley includes:

According to Barley Australia they look at the following aspects when choosing a parcel of barley:

(ii) Achieve even enzyme degradation of the endosperm

(iii) Achieve an adequate complement of enzymes, even after kilning (which is highly detrimental to enzyme survival)

What's new in malt barley use?

What's new in malt barley use?

There are an increasing number of breweries who have started to look at using malt barley within the Australian craft beer market. Coopers Brewery is one of these. Recently, Coopers announced, via an article in Adelaide’s IN-Daily Independent newspaper, that they will be releasing its first ‘Schooner’ Barley malt craft beer. They have predominantly be using ‘Commander’ barley in their single pale ale malt beer and are also about to release a single origin malt from ‘Westminster’ Barley. Within the article, Coopers malting manager Dr. Doug Stewart, says ‘Schooner’s low fermentability creates the rich flavour with good mouthfeel that is ideal for hoppy beers and modern craft brewing’.

Schooner, although an older variety, is still one of the ideal types of malt barley for the craft beer market, especially for boutique breweries. While it has been shown to be outclassed on yield compared to newer varieties on the market, and while some growers will grow the latest higher yielding varieties, Schooner growers still currently have a good market and profitability possibilities with craft and boutique breweries.

On the other hand, you have ‘LaTrobe’ and ‘Scope CL’ barley suiting the Asian markets as they tend to blend those varieties with corn or rice sugars to create a different taste and flavoured beer.

When it comes to malt barley varieties, as mentioned, make sure you do your homework with what market section you are aiming for, the marketability of the product and the crop management required to be part of the industry.

For an excellent feed grain option, when processed, mixed and fed correctly, barley can be used as supplement in forage rations for replacement heifers, in growing and/or finishing diets for feedlot cattle, as an energy source for gestating and lactating cows and is able to be used for several different classes of beef cattle.

And lastly, remember, after doing all that homework on growing a malt barley variety, if you decide that producing your own malt barley just isn’t for you, you can still enjoy tastings of the new craft beers available at your local bar. 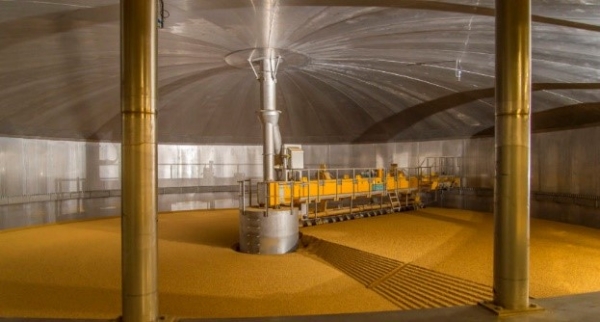 View on-farm photos of cultivars in action and upload your own!