Should I inoculate legume seed?

Seed inoculations or treatments are a way of adding nitrogen fixing bacteria to the seed prior to sowing.

Nitrogen is a very important element for plant growth. Relatively large reserves of nitrogen are held in soil organic matter. The organic matter is gradually broken down and in this decomposition process, it is then converted into nitrogen.

There is a group of bacteria called rhizobia which exist as nodules on the roots of all legume plants. The family of plants include peas, beans, lupins, clovers, lucerne, and medics. These rhizobia bacteria can fix nitrogen, making it available for plants to use.

What is rhizobia bacteria?

What is rhizobia bacteria?

It is possible that the right kind of rhizobia for plant growth may be absent in the soil for particular legume plants. Therefore to get the plant to fix its own nitrogen effectively (producing healthy nodules on the roots) each legume species require the correct rhizobia strain to be present.

Strains of rhizobia bacteria that suit particular legumes are grown and multiplied under laboratory conditions by inoculant manufacturers. The correct strain of inoculant for each legume species can be purchased from particular companies to inoculate onto legume seeds before sowing, refer to the inoculant group table below. Peat is the most widely used form of inoculant carrier but in recent times inoculants have become available as water soluble powder or in a granular form for some strains. 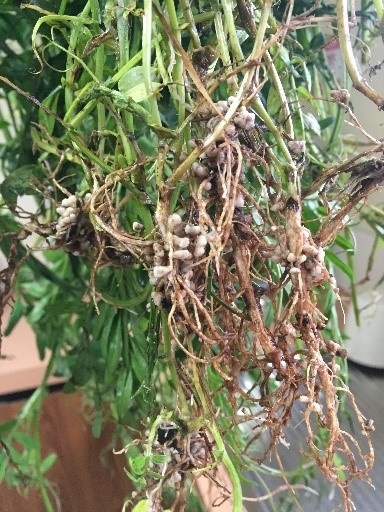 By inoculating the seed it ensures that the legume plants are effectively nodulating with the most effective strain for the species. This then provides farmers with increased seedling vigour, survival and healthy productive plants compared to bare seed.

In cropping regions legumes are becoming critical, not only to provide an attractive income from the legume crop but also their ability to fix large amounts of nitrogen, which is of a benefit to the next crop in that paddock’s rotation. Inoculating legume seed prior to sowing provides large amounts of viable rhizobia for effective nodulation. The rough rule of thumb is that for every tonne of legume dry matter grown, approximately 25 kilograms of nitrogen is produced.

When sowing clover based perennial pastures it is imperative to inoculate the clover seed because successful and healthy clover establishment in the first year fixes large amounts of nitrogen, setting the pasture up with good clover content for many years to come.

As a company we have invested in a state-of-the-art seed treating plant which enables farmers to purchase pre inoculated seed without having to worry about doing it themselves. The computer controlled machine enables us to professionally inoculate seed and also apply insecticides and fungicides using the latest in seed treatment technology.

Our inoculation treatment is called SowEasy® and it ensures seedlings get a superior level of early plant protection. SowEasy® provides broad spectrum protection during plant establishment.

Agriculture relies on legumes that are effectively nodulated and that the benefits of nitrogen fixation from legumes for farming systems are maximised. With legume nodulation what you see above ground is not always a good indication of what is happening below ground. There are a list of factors that can cause poor nodulation. And checking legume nodulation provides a guide to decision making about future inoculation, and indicates whether there is any need to improve inoculation practices. Checking for effective nodulation can also provide an opportunity to identify other factors that may be limiting production, such as soil constraints, herbicide damage or the presence of soil-borne pests or diseases.