Annual medics (Medicago spp.) are legumes used in lower rainfall regions that belong to the same genus as lucerne. Medics were introduced into Australia from the Mediterranean region and a number have become naturalised (Thompson & Menz; unknown). Large seed size, high levels of hard seed and a short growing season enable medics to grow in areas where other temperate legumes, such as subterranean clover, struggle to persist. The main growing season for all annual medics is autumn, winter and spring, reflective of their Mediterranean origins. Medics require an annual average rainfall of 250 mm in southern NSW and 450 mm in northern NSW.

Uses for medics in farming systems include, nitrogen (N) build up before a cropping phase, components of pasture mixes and hay production. Including grasses that persist in low rainfall environments in medic pasture mixes can provide variety and reduce bloat risk. Suitable grasses include, Mediterranean tall fescues such as Flecha and Hispanic cocksfoots such as Uplands. 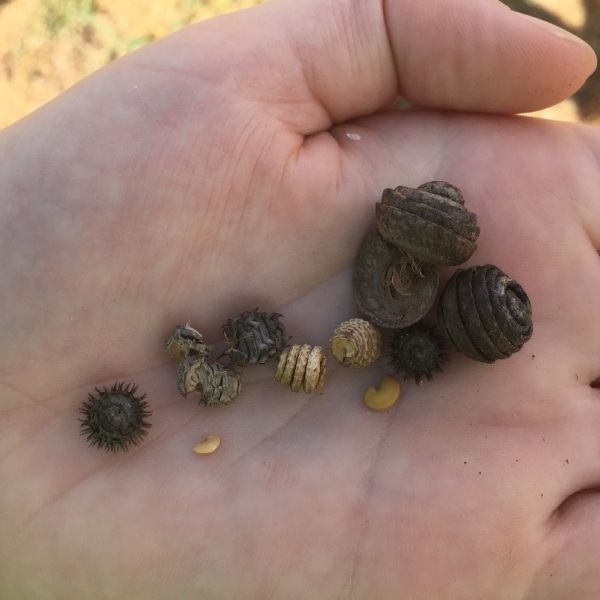 Figure 1: The seed pods of different medics. The name of a medic is usually derived from the shape of its seed pod. The large pods on the right are Snail medic.

Grazing management of medics is especially important during the first year to ensure good seed set. Unlike sub clovers, which bury their seed in the soil, medics are aerial seeders and during the summer the seed pods remain on the ground surface. The size of the pods (see Figure 1) means they are easily consumed by livestock, especially sheep. This can reduce the seed bank for following years.

While the growing season for all types of annual medics is similar, preferences to soil texture varies between species. Most are suited to neutral to alkaline soil types. Medics are very sensitive to sulfonylurea (SU) herbicide residues which are commonly applied to cereal crops. There are varieties of medics which have been bred for SU residual tolerance including Sultan barrel medic and Angel strand medic. Another trait that has been bred into some medics is the pod holding trait found in Cheetah barrel medic and Jaguar strand medic. The pod holding characteristic means pods stay attached to mature plants for longer; mature leaves stay on the plant increasing feed value and seedling vigour and growth rates are higher, than non-pod holding varieties (Lake, 2010).

Below are details on the four main annual medics that are currently widely used and available; Barrel medic, Snail medic, Strand medic and Spineless burr medic. There are several other types of medics including Disc medic, Gamma medic, Button medic, Murex medic and Sphere medics which will not be discussed however more information can be found in the NSW DPI Pasture Varieties Guide used in New South Wales.

Barrel medics have barrel shaped pods and a prostrate trailing growth habit. While the pods have some spines these are not hooked so do not cling to the wool of sheep. Barrel medics prefer neutral to alkaline soil pH levels and do not grow well in deep sands, areas prone to waterlogging or salinity.

Snail medics have large snail shaped pods and an erect growth habit. The pods are eaten by sheep which can provide summer feed however it also reduces the seed bank. Snail medics grow on neutral to alkaline soils and heavier soils including self-mulching clays.

Figure 2: Sava snail medic. Note the amount of seed pod still on the ground from the previous year.

Spineless burr medics have a prostrate, trailing growth habit. The pods differ from naturalised burr medic in that the pods do not have spines so do not catch on the wool of sheep. Spineless burr medics grow best in lighter soils, from mildly acidic red-brown sandy loams to clay loams. Burr medics are tolerant of waterlogging and mild salinity.

View our range of Annual Medics

Take your search to the next level, try our

View on-farm photos of cultivars in action and upload your own!