Deciding what pastures varieties to sow on your farm can at times be daunting. Before deciding on variety, suitability of species to your environment and enterprise should be considered. Soil characteristics, seasonal rainfall, temperature, plant characteristics and livestock enterprise should all be taken into account when selecting a pasture. This article will focus on perennial grasses in a high rainfall zone (700+mm per annum), however the principles are similar for all environments. 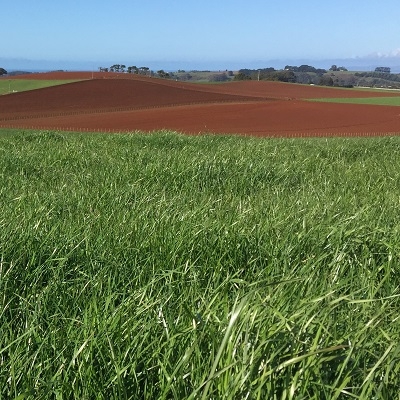 Soil characteristics
Soil type influences what species are best suited to be grown in a paddock. Perennial grass species vary in tolerance to soil acidity and aluminum levels. For example, cocksfoots are more tolerant of acid soils than fescues. Soils with high clay levels and prone to water-logging suit species such as tall fescue and phalaris, whereas free draining soils are favoured by cocksfoots and bromes. Table 1 provides more information on species and their preferred soil type.

Rainfall pattern
Rainfall pattern (summer dominant, winter dominant or uniform), affects when pastures will be productive and which species will be best suited to a region. Plants need the most soil moisture during active growth, so seasonal growth of pasture species should be matched to rainfall. For example growing a summer active cocksfoot is going to grow best in a summer dominant rainfall area because the rainfall occurs when the plant is actively trying to grow. If the summer active cocksfoot was planted in an area with hot, dry summers it would not persist due to lack of moisture.

Temperature
Temperate perennial grasses prefer temperatures between 12 and 30ᵒC for growing (DPI, 2016). Perennial ryegrass is most productive at 20ᵒC (Hunt & Halligan, 1981) and production declines at 24ᵒC (Agricom, 2017). The optimum growing temperature for tall fescue is higher than ryegrass, 26ᵒC and active growth continues into the mid 30ᵒC (Agricom, 2017). This means tall fescue is better adapted to warmer springs and summers than perennial ryegrass. Most temperate grass species will tolerate frost, however minimal growth occurs once temperatures fall below 8ᵒC (DPI, 2016).

Seasonal growth curve
Pastures do not grow at the same rate all year round. It is important to think about when a pasture species is going to be most productive (see Table 1) and how this will fit in with your livestock needs such as lambing/calving, weaning and finishing. Some species have a period of dormancy such as winter dormant phalaris varieties whereas other have summer dormancy such as perennial ryegrasses. The pasture growth curve is also influenced by climate. The following link indicates pasture growth for different regions: http://www.makingmorefromsheep.com.au/turn-pasture-into-product/tool_8.2.htm

Compatibility with other species
Temperate grasses are suitable for mixes with clovers and/or herbs and forage brassicas. Sowing a clover with a grass is generally advised as the clover through rhizobia provide nitrogen for the grass. However it is important to remember than when more species are included in a mix there are reduced herbicide options for weed control. Fast establishing grasses such as ryegrass, should not be sown with a slow establishing grasses such as tall fescue or cocksfoot because the ryegrass will out compete the other grasses.

When is feed needed?

When is feed needed?

When is your feed shortage? Which pasture species are going to fill or reduce your feed gap? Remembering that the amount of pasture growth will be influenced by all of the factors discussed above.

When choosing a pasture to sow environmental factors and plant factors should be considered before choosing a variety. Think about what species is going to grow in your environment and give you feed when you need it.