Russian wheat aphid (Diuraphis noxia) (RWA) is a new pest that was first found in South Australia in May 2016.  By mid-2017 infestation had spread to Tasmania, Victoria and New South Wales (NSW Department of Primary Industries, 2017). The warmer, drier climates of Australia’s cropping zones provide a perfect climate for the pest to reproduce and thrive. It is now unfeasible to eradicate the RWA from Australia, therefore growers must manage the pest in order to minimise its damage to crops and its spread to new areas. 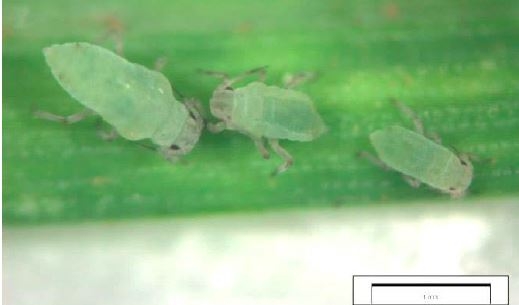 The primary hosts for the RWA are wheat and barley crops. The RWA can also cause damage and host on other species from the Gramineae (grass) family including other cereals, pasture grass species and grass weeds.

Description
The RWA has a slender, small (less than 2mm long) and light green coloured body. Different to other aphids, the RWA has an elongated narrow body and a “double tail”. It also lacks siphuncles (exhaust pipes) which is a distinguishing feature of other aphids (NSW Department of Primary Industries, 2017).

Spread
RWA can infest new crops by walking over green leaf material or by flying. Long distance dispersal can occur via wind currents, on machinery, clothing or plant material (Umina, Baker, & Edwards , 2017). Good hygiene of machinery and people between crops, is a necessary practice to reduce the spread of the RWA over long distances.

Symptoms
The RWA feeds on seed heads, flowers and newly emerged leaves. As it feeds, toxins are released into the plant. Symptoms of the RWA include chlorosis and necrosis of leaves causing white, yellow or purple streaking on leaves. Other leaves may be rolled and awns may develop a hook-shape. Plants can become stunted and lose vigour, which can result in yield penalties (Pest Facts , 2016).

Yield Damage
The RWA has the potential to cause significant damage to wheat and barley crops. In other countries, yield losses of up to 80% in wheat and 100% in barley have been recorded. Many studies agree that yield damage is proportional to infested tillers, with a 0.5% and 0.8% yield loss for every 1% infested tiller on wheat and barley, respectively (Umina, Baker, & Edwards , 2017). Research has shown, damage is generally greater when infection occurs at a younger growth stage. However, grain test weights can be negatively affected if heavy infestation occurs during heading.

While the Russian wheat aphid is a new pest growers must watch out for, it can be managed through a range of cultural, chemical and biological control methods. Like other pests, practicing rotational cropping to break the life cycle of the insect will help minimise infection and damage to crops. Ensuring there is no “green bridge” from volunteer cereals before sowing is a vital management step to ensure there is no RWA present in the paddock prior to sowing. Preliminary research has shown that seed treatments can provide early protection against RWA (Umina, Baker, & Edwards , 2017). This is particularly useful when crops are being sown in high risk situations such as early sown crops or paddocks with volunteer cereals. A number of natural enemies of the RWA are present in cropping areas. These include parasitic wasps, ladybird beetles, lacewings, damsel bugs and hoverflies. There are now a number of registered chemicals available for the control of RWA. The threshold for RWA management with a chemical control is warranted when more than 20% of seedlings are infested before tillering and 10% of tillers infested after tillering (Umina, Baker, & Edwards , 2017).

While the RWA is a new pest to Australia which poses a threat to wheat and barley crops, a sound integrated pest management strategy will minimise crop damage. Research into the pest will continue in order to gain a better understanding of the life cycle and future control methods.

For more information on the Russian Wheat Aphid please follow the below links to industry publications:  https://grdc.com.au/__data/assets/pdf_file/0027/244377/Russian-Wheat-Aphid-Tactics-for-Future-Control.PDF