Sub tropical grass pasture species have enjoyed great popularity and good success as a pasture base in Queensland and Northern NSW for several years. It is now being used further south where farmers are looking for tough, resilient and persistent pastures capable of utilising summer rainfall events. In more recent times extremely dry or drought conditions have highlighted the value of these pastures in providing long season dry matter production, particularly in cattle breeding operations.

There are several tropical grass species such as Buffel, Bluegrass and Sabi grass. This article concentrates on the more commonly used types in NSW.

For a large part of Northern NSW, there are 3 or 4 tropical grass species being used to maximise the attributes of the different varieties. Species should be selected for different situations to suit either heavy or light soil types. The other factor affecting which species to sow is soil acidity.

In heavier black soil types, mixes including the following species have become popular as more farmers look for a persistent long-term pasture option.

Premier Digit, whilst slow to establish, is palatable and extremely persistent once established and shows its versatility in paddocks where soil types vary from red to black. It is quick to respond to rainfall events and is tolerant of hard grazing conditions.

Bambatsi Panic is very palatable and while not as tolerant of overgrazing as digit, it can be a persistent pasture component if allowed to set seed periodically. It is well suited to heavy soils.

Katambora and Callide Rhodes grass are faster to establish than Bambatsi Panic and Premier Digit. They can be dominant when sown in mixes for the first two to three years, especially if the stand is lightly grazed during establishment. Rhodes grass spreads across the surface with runners and is less palatable than digit or panics if not managed correctly. It has become less popular in Northern NSW where soils types can maintain panics and digit.

In lighter red soils Gatton panic may replace Bambatsi panic as a mix partner to premier digit and rhodes grass. It is palatable and regenerates well from seed but is not suited to set stocking situations as it tends to be preferentially grazed.

Sandy, acidic soils lend themselves to the selection of Consol lovegrass as the variety of choice. Consol is tolerant of low pH soils with high exchangeable aluminium levels. Reasonable feed quality can be achieved if attention is paid to vegetative growth management such as regular slashing to maintain fresh growth. Consol rapidly loses palatability if grazing is delayed.

Windy Station has been using subtropical pasture mixes for several years in their beef operation at Blackville near Quirindi in northern NSW.

They have found that a Premier Digit and Bambatsi Panic mix gives them maximum production from their red sloping soils. The mix also comes with several benefits to their cattle breeding operation. A summer dominant 650mm annual rainfall pattern combined with a long summer season allows high dry matter production and valuable standing feed to take into winter. Paddocks are rotationally grazed with mainly replacement heifers and cows and have proven to be resilient, being able to handle current drought conditions, there have also been very few animal health issues.

Consol lovegrass has been sown in some light sandy ridge soils and this has proven to be extremely tolerant of hard grazing and responds very quickly to light rainfall events in warm season months. 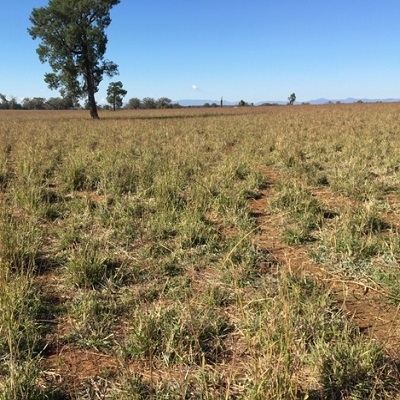