In low rainfall environments (<500 annual average rainfall) pastures play an important role in providing feed for livestock and increasing soil nitrogen in cropping rotations. While cereal crops can be grazed during winter, pastures can reduce feed gaps during other times of the year. Lucerne is one of the most valuable pasture species in low rainfall environment, as it can persist for many years and responds well to spring, summer and autumn rain. Annual legumes are important for winter and spring feed and perennial grasses such as Hispanic cocksfoots and Mediterranean tall fescues can be mixed with legumes to reduce animal health risks.

The value of lucerne

The value of lucerne

Lucerne is the major perennial legume component of improved pastures in low rainfall environments due to its ability to respond to moisture and grow high quality feed. Well managed lucerne has metabolisable energy (ME) levels that range from 9.5-11 MJME/kgDM and protein levels that range from 18-24% of drymatter (DM)  . Lucerne develops a long taproot which (if unimpeded) allows the plant to access moisture deep in the soil profile and persist through dry times. In spring, summer and autumn, established lucerne responds well to rain which has been very noticeable in the recent dry conditions. Lucerne stands have looked almost dead throughout the dry autumn and winter but, after receiving late spring rain, plants are putting up green shoots within days. Lucerne varieties vary in winter activity; semi-winter active (5), winter active (6-7) and highly winter active (8 -10). Winter activity comes at the cost of persistence, but in a cropping rotation of 3-5 years winter activity is desirable.

Doug McDonald has a mixed farm just out of Barellen NSW (460mm average rainfall), he prefers to grow a highly winter active lucerne, Titan 9, on his property instead of older varieties such as Aurora (6). “It was amazing the growth Titan 9 gave in June and July, and we hammered it,” said McDonald. See Figure 1. 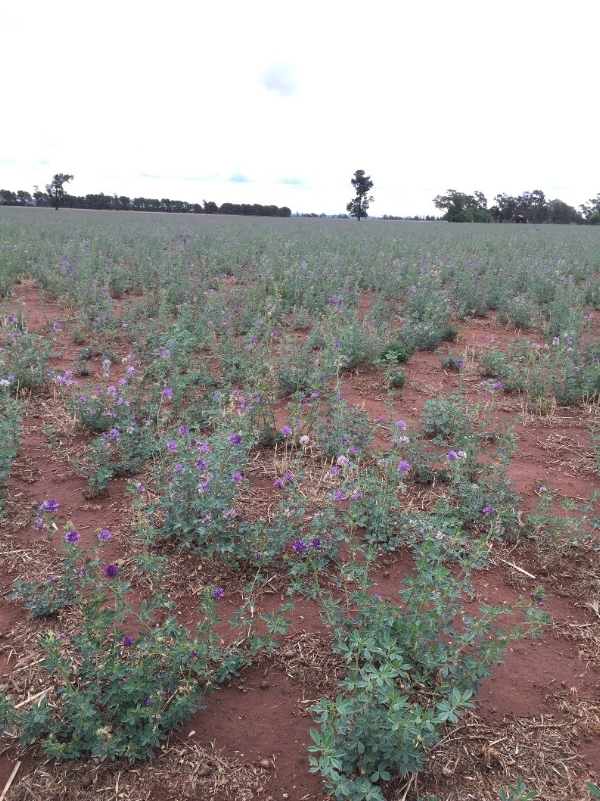 There are many types of annual legumes commonly used in pastures in low rainfall environments. These legumes persist by setting seed during spring for the following autumn. Hard seededness is a mechanism used by annual legumes which prevents a proportion of seed from germinating, leading to higher levels of persistence. This is particularly important in areas that get unreliable seed set or are prone to false autumn breaks. Short season sub clovers such as Izmir and Urana have high hard seededness (50-65%) and prefer free draining soils. Other short season clovers such as Bladder clover, Rose clover and Gland clover also have high hard seededness but generally do not produce as much biomass as sub clovers.

Barrel medics can survive with 250mm annual rainfall and favor neutral to slightly alkaline soils. Spineless burr medics have pods that do not have spines, reducing vegetable matter in wool. These medics are suited to medium to light textured soils and can tolerate mild acidity and grow in 250mm annual rainfall. Serradellas are another annual legume suited to low rainfall environments with sandy loam soils and are tolerant of moderate levels of exchangeable aluminum. Serradellas are indeterminate flowerers, which means they flower when moisture is available. When selecting annual legumes, soil type and farming system will determine which is the best annual legume option, usually a mix is the best.

Some temperate grasses have the ability to go dormant over summer, this means the plants are not actively growing in hot dry conditions allowing them to persist for many years. Mediterranean tall fescues, such as Flecha, develop a deep fibrous root system and are well suited to heavy soils. Fescues can withstand water logging better than lucerne. They are most productive in spring and need to be managed well to stop them from going reproductive and less palatable to livestock. Another species with summer dormancy is Hispanic type cocksfoot, such as Uplands. Cocksfoot is more suited to lighter soils and has some acid tolerance. A benefit of using grasses in a mix with legumes is that it creates a more varied diet and reduces animal health issues associated with legumes such as bloat and red gut.

A farmer near Hillston NSW, with less than 350mm annual rainfall, is running a mixed enterprise using a perennial grass and legume mix in the pasture phase of his cropping rotation (see Figure 2). “We have found that the AusWest Seeds pasture mix of medics, clovers and Uplands cocksfoot, for winter grazing, and lucerne for summer feed, works really well in providing year-round, high quality feed for our livestock. The strong legume base in the mix provides a great nitrogen source for the grass and consequently good bulk. This appears to be quickly building our organic matter levels and setting the nutrition for the cropping program very well.”

There are several plants that have the ability to grow in low rainfall environments and provide feed for livestock. It is worth considering how some of these plants can be used to increase livestock production in your system. 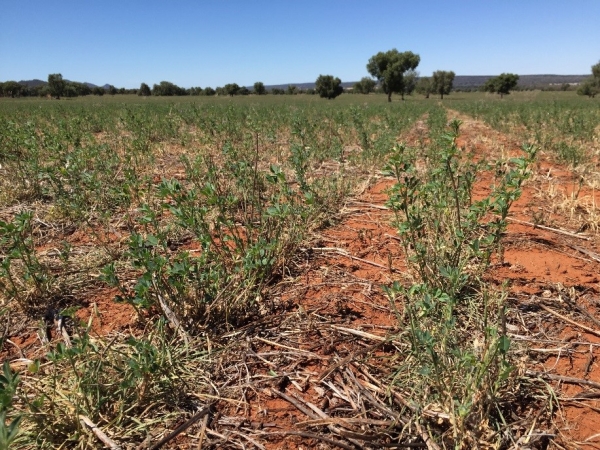 Figure 2: A mix of 1.5 kg/ha Aurora lucerne, 1 kg/ha Uplands cocksfoot, 2kg/ha Cheetah medic and 2kg/ha Izmir sub clover near Hillston, NSW. This photo was taken in November so the sub clover and medics had already set seed and died off, only lucerne and cocksfoot are visible.