Keith Warren, one of the first farmers to try Titan 5, a new semi-winter dormant lucerne, is being rewarded with excellent yields, quality and persistence in its first two seasons.

In a recently started farming business focusing on growing hay and silage at Flynn, east of Traralgon, Keith bought three centre pivots to use water from the Latrobe River and now supplies local graziers and dairy farmers with quality pasture hay, millet and lucerne.

The switch from dairy farming, after 40 years of milking, has been a rewarding one.

“I think lucerne will be the best bet in the long run, although this is more of a hay growing area, because it’s a high protein feed and it has an excellent feed value for dairy farmers,” Keith said. In terms of production, it gives him up to six cuts in a season, so he has a good supply of feed throughout the year.

Titan 5 was new on the market in 2017 and Keith only secured enough seed for half his requirements, with the other half sown to an older lucerne variety. This gave him a good opportunity to compare the two.

Keith planted the lucerne in October 2017 and was cutting it by Christmas. Another three cuts, including a cut of silage, were taken in the first season.

“I was happy with how the Titan 5 established. You could see that it was growing taller and thicker than the other variety, especially when mowing through it,” he said. 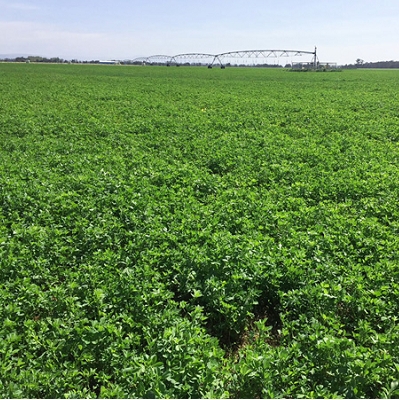 In the second season, it produced even more.

“I probably started cutting it around August and by October I was getting more than 250 rolls of silage off 24 hectares in the middle of spring,” he said.

“That’s why I’ll be sowing the rest of that centre pivot to Titan 5 this year.”

Keith found the lucerne needed a lot of water over the dry summer and autumn, but he has been able to cut it as often as every 28 days.

After each cut, he fertilises the crop with 200 kg/ha of a super potash blend.

Titan 5 is a hybrid lucerne, combining Medicago sativa and Medicago falcata genetics, which improves its persistence and water use efficiency.

It is a semi-winter dormant variety, giving Keith more cuts through summer when he’s able to make hay and then going dormant in winter when it’s too cool and damp to make hay or silage.

It can be cut as hay or silage and baled in a variety of sizes and weights for different markets.

“I’ve baled the Titan 5 lucerne as hay and silage, from silage rounds, hay rounds, big squares and even a few small squares of hay for the horse market,” he said.

“I always test my hay and sell by the weight, and Titan 5 gives good quality hay that sells for a premium.

“For example, the test result for my first cut of Titan 5 silage this season was 24.4% protein, 10.4 metabolisable energy and 29% fibre.”

“We’re seeing great grazing tolerance and persistence with Titan 5 in our trials at Ballarat, along with high yields and quality feed values,” he said.

“The yields are as good as some of the dormancy seven and nine varieties.”

He added that Titan 5 provides a strong ground cover, which is good for reducing weed competition and maintaining a nice thick stand for grazing.

Simon says “I think Titan 5 will become very popular with both graziers and hay and silage producers like Keith.”