Deciding to drop faba beans out of the rotation and try Benatas vetch in its place is proving successful on a number of fronts for David Mulraney at Mt Elephant Pastoral near Derrinallum.

As Farm Manager, David oversees 2,300 hectares of winter crops including wheat, barley and canola, as well as 10,000 breeding ewes on ryegrass and phalaris based pastures.

Last year he established a large-scale trial of Benatas vetch, sowing 80 hectares of the new variety in autumn as an alternative to faba beans, which had been yielding poorly and suffering from disease issues.

“I had heard about Benatas from friends and neighbours and planned to try it as a break crop and graze it,” David said.

The results were better than he had hoped. Not only did it give him one of the best spring feed options on the farm that year, but it also provided a big boost in soil fertility for the following crop and allowed a year’s chemical break on the paddock.

Bred in Tasmania, Benatas vetch is a later flowering variety that is better adapted to higher rainfall zones and cooler conditions. Traditionally, vetch has only been grown in the drier cropping zones for high protein hay.

At Mt Elephant, Benatas vetch was sown at 40 kg/ha with a granular inoculant and locked up to grow until mid to late August. By this time, it had established a good bulk of dry matter, more than most of the pasture paddocks on the farm.

A mob of ewes and lambs in need of a pick-up were selected at marking time. These were put on to the vetch at a stocking rate of 10 ewes per hectare. Eight weeks later, David was more than pleased with the results. “The sheep liked it and did well on it. Those eight weeks turned some of the poorer performing lambs into a really nice article – it gave them a big lift,” he said.

Once grazed out, David left the paddock to lie fallow over summer, doing nothing more than soil testing. The tests showed more than 400 kg/ha of available nitrogen left for the following crop.

“That’s the beauty of Benatas vetch – we’re returning nitrogen to the soil as well as getting a high-quality feed source, and as a result, this year’s canola is looking like one of the best canola crops I’ve ever grown,” he said.

The double break effect of growing vetch is also making a valuable contribution to the farming system.

“I don’t try to kill any weeds out of it. If anything, the volunteers  give the vetch something to climb up,” he said. “The sheep clean up all of those initial weeds and then I have another go at any grass weeds in the second year while the canola is growing.”

This year, David has 100 hectares of Benatas vetch ready for grazing. While the season has been wetter than 2018, the crop is growing well on shallow raised beds of 10 cm in depth.

“Benatas has worked well here at Mt Elephant as a break crop and a high-quality feed, so it is definitely worth having a go,” he said.

Michael Grant from Stephen Pasture Seeds has seen Benatas vetch perform well in a variety of situations across the Western District of Victoria over the past two to three years.

“Benatas vetch has become popular, very quickly as Western District farmers have seen its potential for grazing, hay or silage,” he said.

He said it was normally under-sown with oats, which provided a vertical framework for the vetch to climb in hay production systems. “This can make a really high-quality hay of 18-25% protein that is highly sought after by dairy farmers,” he said. “It’s also a good break crop for controlling resistant grass weeds or cereal root diseases in the Western District, where it’s too cool and wet for traditional vetch crops,” he said.

Sowing information and crop establishment notes are available on the Stephen Pasture Seeds website or contact your local seed supplier for more information. 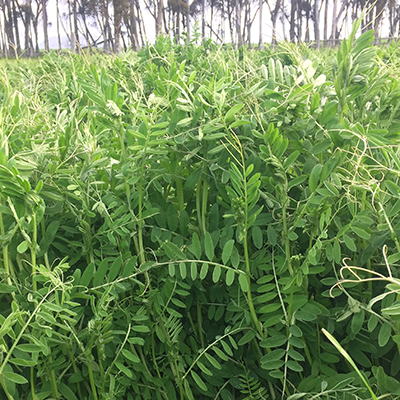