Moving on to greener pastures

“Reggie and his dog Ivan on the dairy farm near Cobden. This Hummer tall fescue pasture is at its best in spring and summer, when it can be ready for regrazing after only 12 or 13 days.”
Challenging convention is at the heart of the Davis family’s dairy farming operation, so it’s no surprise they are moving away from perennial ryegrass to some exciting new pasture species. Reggie and Tanya Davis and their four children milk 600 Holstein cows grazing on 260 hectares of pastures near Cobden.

Along with three other farming families in the area, they supply fresh milk to the Green Pastures label they established five years ago. It’s now one of the only Australian-owned milk brands available on supermarket shelves.
The Davis family is committed to natural and sustainable dairy farming. One of the first changes they made almost a decade ago was to begin building their soils with biodynamic farming – replacing the majority of their conventional granular fertiliser program with home-made compost.

More recently, new grass varieties have been established on the farm to provide better sustainability and persistence. According to Reggie Davis, ryegrass pastures are often not robust enough to handle the rigours of the extreme climatic conditions experienced on the farm, or the high stocking rates they need to maintain profitability.

“It’s not cheap replanting your pastures every year,” he said.

“Ideally, we want to have pastures with a good density and good persistence that don’t need a truckload of fertiliser every month.”

He started exploring alternatives three years ago, with help from pasture seed specialist, Michael Grant from Stephen Pasture Seeds. The first ryegrass pastures removed were those being grown under irrigation on volcanic soils. Problems with pugging, cracks and crickets were constantly running down the pasture base.

Mr Grant suggested trying Hummer tall fescue, a deep-rooted, summer-active perennial grass as an alternative. Rather than gradually declining over time, Mr Davis says the Hummer keeps getting stronger every year. The Hummer is mixed with white clover and is boosted with their home-made compost, as well as some sulphate of ammonia in the winter.

“Hummer grows like mad in spring, so we often have to cut it for silage to keep up with the growth,” said Mr Davis.

“These newer release fescue varieties like Hummer are more palatable for the cows than the older style varieties that would cut your tongue if you tried to chew them.”

With the success of these Hummer pastures, Mr Davis turned his attention to a group of paddocks with variable soils. This time, Mr Grant suggested a Hummer tall fescue and Savvy cocksfoot mix. Savvy cocksfoot is a new high yielding cocksfoot variety that is suited to shallow, lighter soils and is disease resistant and bred to tolerate hard grazing.

“The Savvy and Hummer together have been good on our irrigated pastures, with the Savvy dominating on the dry corners of the centre pivot paddocks,” said Mr Davis. 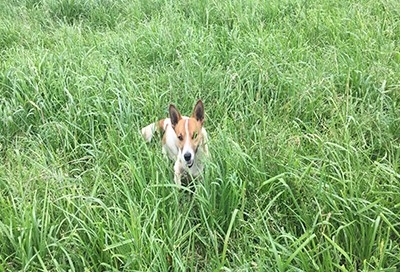 Ivan in Hummer and Savvy pasture in Cobden
“Savvy’s brilliant when you get a shower of rain over summer, it greens up straight away.”

But he said it was important to go through a cropping program to prepare paddocks well and give the new deep-rooted pastures time to get established.

“Don’t graze it too hard the first winter and that way, you should have it for five to 10 years,” he said.

His latest pasture renovation project has been on some dryland hill country. Again, the focus has been setting paddocks up for long-term persistence.

“We sowed Savvy cocksfoot with Prospect AR37 perennial ryegrass on some dryland paddocks this year,” he said.

“The ryegrass is really a cover to suppress weeds, provide some early grazing and give the Savvy cocksfoot time to establish.

“Over time, I expect the ryegrass will decline in this hill country, while the Savvy cocksfoot thrives.”

The whole grazing system is supported by their biological farming system, which is based on using effluent from the herd mixed with gypsum to create a healthy compost. This largely replaces granular fertilisers. Mr Davis said they have been tracking soil health and fertility for a decade and have seen improvements in a range of areas, including the numbers of worms and other soil biota and increasing soil phosphorus levels.

“The combination of our soil management practices and the introduction of these new deep-rooted pasture varieties are really paying dividends for our farm,” he said.

“We’re not spending as much on bought in feed, or fertiliser, and with pastures that will last, we’re reducing the time and money spent on sowing and pasture renovation.”

Michael Grant said dairy farmers had a range of pasture and cropping options available to them beyond traditional ryegrass pastures.

“One size doesn’t fit all, and the right pasture depends on your rainfall, soil type, grazing patterns and the way you want to manage the farm overall,” said Mr Grant.

“It has been great working with Reggie. He’s open to addressing problems and trying new things.

“This new approach is really working for him – you can just see it in the pastures.”