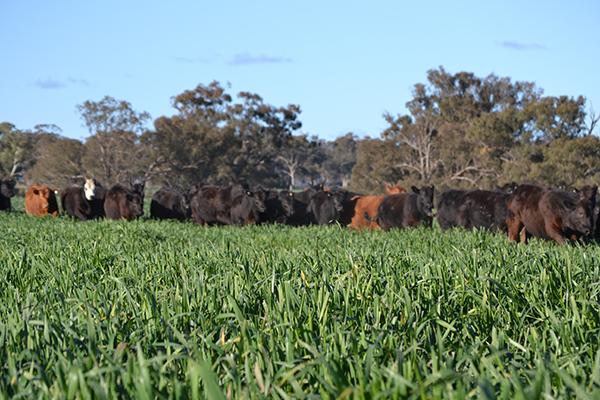 For most grazing cereals under good growing conditions the first grazing will occur 6-8 weeks after plant emergence. Any seed treatments used for disease and insect control may delay the time to first grazing depending on their withholding periods. Stocking densities will depend on animal production targets and available dry matter.

Early dry matter production of cereals can be deceptive, especially with varieties with winter habit and prostrate growth habit. Knowing how much dry matter is available will influence stocking rates for early grazing. The true forage types, especially oats (e.g. Bond) due to their semi-erect to erect growth habit, are more suited to grazing with cattle. The range of dual-purpose cereals, especially those with a strong vernalisation requirement (winter habit), are more prostrate in growth habit and considered more suitable for grazing with sheep. Where grazing and grain recovery is the preferred option for dual-purpose cereals, awnless varieties should be considered for frost prone areas. Not all environments are suitable for varieties with a strong winter habit as the cold requirement for vernalisation may not be enough.

Many livestock producers are also moving away from planting a monoculture cereal to planting suitable companion species with their grazing cereals with the aim to improve animal diet and extend the quality of the feed on offer later in the season. These alternative species can include ryegrasses, vetch, brassicas and turnips.

The number of grazing’s will be largely dependent on time of sowing, growing conditions and whether set-stocked or rotationally grazed. 2020 was a good example of having alternative options, when good seasonal conditions and lack of livestock numbers following drought meant that many cereal grazing crops could not be grazed. Many producers took the option of early silage to replenish fodder supplies and build drought resilience.

The latest grazing time and severity of grazing on crops intended for grain recovery or silage/hay production should be based on growth stage. Ideally stock should be removed by growth stage Z31. Grazing later than this stage and grazing intensity will not only reduce dry matter recovery but also delay maturity and grain recovery.

However, the losses associated with any decrease in grain yield can be outweighed by the income generated from liveweight gain, especially with current lamb and cattle prices.

Nutritional requirements will vary according to climate, soil type and paddock history. Where nitrogen fertiliser is required, split applications are suitable for forage and dual-purpose cereals after grazing’s and for hay/silage or grain production.

Weed control is important not only to maintain clean paddocks in a rotation in preparation for future crops or pastures but to also produce the highest quality grain or hay/silage possible. This will be especially important in early sown crops where weed germination did not occur before planting. Spray grazing techniques can also be used effectively for many broadleaf weeds, especially where feed is short. Timing of weed control options needs to be matched with grazing requirements so that any chemical withholding periods are observed.

Several health conditions or disorders such as mineral and vitamin imbalances, enterotoxaemia (pulpy kidney), hypomagnesaemia (grass tetany), hypocalcaemia (milk fever), photosensitisation in sheep and nitrate poisoning can affect stock that are grazing cereals. To minimise the possibility of any health disorders growers should have appropriate vaccination and supplementation plans in place. It is common practice to supplement sheep and cattle with magnesium and/or sodium when grazing wheat or triticale which have a high potassium to sodium ratio. Research has shown increased liveweight gains of 20-60% in sheep and cattle grazing wheat or triticale.

In tablelands and higher rainfall areas late winter/early spring planting options can be considered for grazing or producing hay or silage to replenish on farm fodder supplies. Paddock preparation should be undertaken well in advance of anticipated sowing windows to take advantage of any rainfall events that may occur. Options to sow can include straight cereal or combinations of cereal/field pea or cereal/vetch mixes in different combinations to maximise the quality of the hay or silage being produced. If planting mixes, it is important to understand growth habit and maturity of the varieties being sown to synchronise flowering for the ideal stage of cutting. The cereal chosen should have spring habit (not winter as that requires vernalisation) and preferably awnless if using wheat, or reduced awn with triticale especially for hay production. Seeding rates need to be at the higher end as spring habit cereals will produce less tillers than cereals sown in autumn. Paddock selection (e.g. free of rocks) is also important if considering using contractors to make hay or silage.