Trifolium subterraneum, commonly known as sub clover, is an important legume for farming systems in south eastern Australia. In high rainfall, temperate regions sub clover is used in combination with perennial grasses and other hard-seeded annual clovers like Balansa and Arrowleaf to produce high quality forage for livestock production. These clovers convert atmospheric nitrogen into a form that can be used by the grasses in your pasture sward. In lower-rainfall, cropping areas the main role of sub clover is to enhance crop yields by increasing soil nitrogen and breaking crop disease cycles. The range of maturities available in varieties enables sub clover to be sown across a number of different environments.

In sub clover seed production crops the aim is to increase seed yield through enhanced herbage, nutrient and weed management. On irrigated sub clover seed crops, cutting for silage is a management practice that increases seed yields and minimises residual herbage at harvest time. Access to irrigation reduces the risks associated with cutting silage, as does using it on early to mid-maturing varieties. Conversely on dryland production paddocks this practice is of high risk and not generally recommended. Defoliation with herbicides in spring or post 5% flowering should be avoided, with the timing being between June and July. 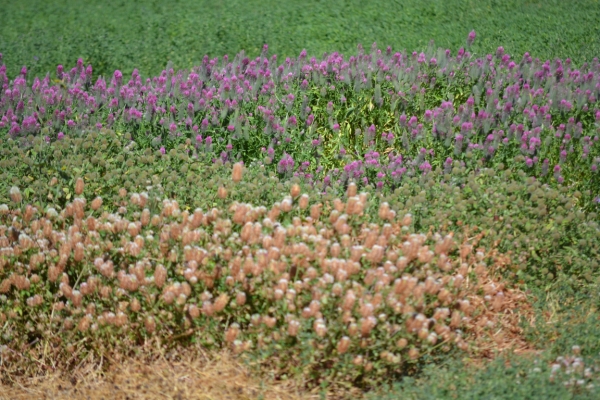 The hard–seeded annual clovers should also be managed for seed production, rather than treated as opportunity crops when good seasons occur. Grass weed control should be a priority to ensure high levels of purity in the seed harvested.

One common question is how should clover based pastures be managed and assessed in livestock production systems or cropping rotations under the prevailing seasonal conditions?

As a general rule 200 kg/ha of seed is the minimum considered necessary for the satisfactory growth and survival of sub clover pastures. Research has shown that in areas like central NSW in the first year you can expect 20 to 150 kg/ha under a cover crop, assuming a non-drought year. As a pasture only (no cover crop) you can expect 200 to 1000 kg/ha. Strong correlations exist between seed yield and seedling regeneration and seedling regeneration and winter herbage yield.

Moisture stress during flowering can have big impacts on seed yields, as evidenced in the 2015/16 harvest when many sub clover and hard-seeded annual legume seed crops failed due to the dry finish.

Sowing dates, seeding rates and variety maturity will have big influences on first year seed production. A very early maturing sub clover variety like Izmir or early season varieties like Urana and Dalkeith have a better chance of setting reasonable seed reserves than mid-season varieties like Riverina and Coolamon. Mid-season varieties produce sufficient seed in most years to ensure their persistence in permanent pastures.