With coastal weather conditions, sandy soils, pests and rust affecting the success of ryegrass on Janelle Little’s sheep and cropping farm on Tasmania’s north west coast, she needed a variety that would see her through the tough times.

In March 2014 Janelle planted Kingsgate perennial ryegrass as part of a mix which also included cocksfoot, brome and clover.

Kingsgate, a perennial ryegrass variety from Agricom that was bred to replace Kingston. It is an early heading variety with dense tillering that provides excellent groundcover, improving pasture persistence.

In the past, Janelle had included other ryegrass varieties in her pastures with little success, they either didn’t perform well in the sandy soils which cover some of her farm or didn’t cope with rust and pest invasion.

Kingsgate has improved rust resistance over Kingston and is available with standard endophyte (SE) which offers some protection from pests. 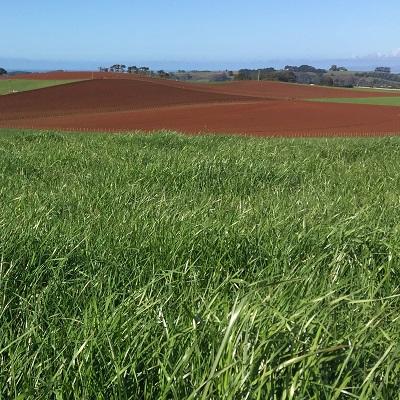 "My property is coastal, so I needed a grass that could withstand periods without rainfall. Kingsgate, has achieved this as it survives the dry periods and responds well when rainfall beings and remains productive with excellent ground cover.”

Blair McCormick, Product Development Manager, for Agricom explains “The spring rainfall can cut out where Janelle’s farm is located so she needed a grass that produced in winter and early spring which Kingsgate does. The incorporation of cocksfoot into the mix provides summer feed, persistence and also decreases the risk of ryegrass staggers given Kingsgate is standard endophyte (SE)”

Replicated trials conducted at Lismore in Victoria in 2011, showed Kingsgate had excellent persistence through a harsh summer when compared to other well-known perennial ryegrass varieties. Maintaining a ground cover percentage of 80 percent.

Janelle said, “With Kingsgate performing well in marginal ground on my property, I then took the next step and have incorporated it into my cropping program, planting Kingsgate perennial ryegrass only as a rotational crop. As a perennial it gives me flexibility if I decide that it remains for an extended period.”

Janelle continued “Kingsgate ryegrass has also given me the opportunity to plant lucerne and clover to finish livestock and produce silage and hay due to its ability to exceed my feed requirements.

Find out more about Kingsgate Perennial Ryegrass Click Here
View on-farm photos of cultivars in action and upload your own! #BEHINDTHESEEDS
Too many choices? Narrow down your selection SEED SELECTOR