Hay stocks shored up with Mach 1®

With dry times putting pressure on feed supplies across east Gippsland, more and more graziers are turning to annual crops to produce winter feed stocks in a targeted way.

Peter Soutter has already seen some success from this approach, growing a small annual ryegrass crop on his Benambra property last season.

“It has ended up being the difference between having enough hay for my stock or having to buy in hay,” Mr Soutter said.

“In hindsight, I would have grown more of it, but we’re all wise in hindsight.” 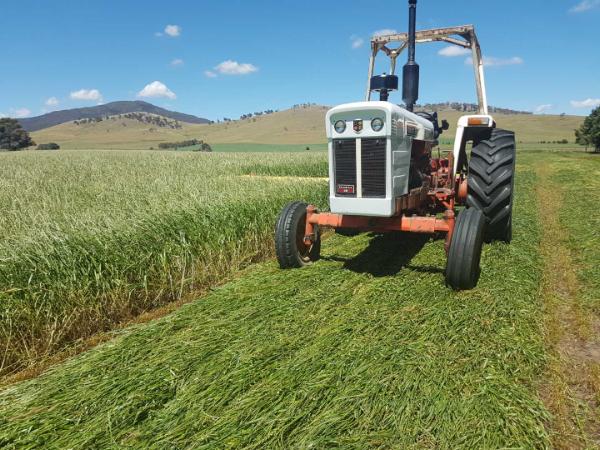 The old and the new: Peter Soutter was cutting premium ryegrass hay at Benambra last spring with one of his vintage David Brown tractors. The Mach 1® annual ryegrass produced more than 20 bales/ha over two cuts in a dry year.

Mr Soutter decided to try something different last autumn, putting in an annual ryegrass crop to give his hay production a boost after a failed spring in 2017 had left his feed supplies low.

He and his wife Sue manage ‘Ellerslie’, an 800-hectare property focusing on self-replacing Hereford cows and calves and merino sheep.

“It’s been tough going for the past two years, with annual rainfall well down on average,” he said.

“We didn’t get any hay from the spring of 2017, so we thought we’d rip up a bit of ground and put something in that would give us a better yield than normal pasture.”

One of their better paddocks was chosen and prepared with lime prior to sowing and DAP at sowing to give the crop a good start.

“I wanted to sow it in mid to late March, but the ground was so dry it would have been pointless, so it didn’t go in until 5 May,” he said.

He said it struggled all winter with the cold and although there was some rain, it wasn’t much.

“When spring came, we were still getting only bits and pieces of rain, but it was growing pretty well,” he said.

“We might have had some of the neighbours taking a look over the fence by then too.”

The Soutters cut 58 round bales of hay (one and a half metres across) from the Mach 1® paddock in mid-November 2018.

“That was a very good result for us, considering how dry the year had been,” he said.

A second cut in December added another 15 round bales.

The premium feed is now stacked up in the shed and earmarked for first calving heifers this winter.

“It’s winter when we struggle most for feed, because it can get pretty cold here, down to minus six degrees and cold winds, so the stock need something that’s going to fill them up,” he said.

That’s a lot lower than he’s used to, because of the meagre spring rainfall. Between 1 September and 16 November only 74 mm was recorded on the farm.

The difference in production between the Mach 1® and his traditional pastures made a big impression on Mr Soutter, who intends to grow three times as much Mach 1® this year.

“I was really pleased with Mach 1®, so I got some seed early and put it aside,” he said.

“The paddocks are ready to cultivate now and I’ll be discing them ready to sow as soon as we get rain.

“I think this is the way it’s heading. I see more and more people putting in crops for hay or growing oats. It helps that the seed companies are releasing better and better varieties all the time.”

He said in more normal years, it might also be possible to graze the Mach 1® crop in winter as well.

“I can’t wait to see how much it will produce in a good year.”