“We’re building our cow numbers up to about 450 breeders and as part of that process, we also need to renovate with pasture on the property,” Alan explains.

“We’re currently doing a lot of pasture renovation using Mach 1 annual ryegrass from Stephen Pasture Seeds, and then two years later that country is sown down to permanent pastures.”

Good pastures – both annual and permanent - are a critical part of the Willow Grove operation for a number of reasons, not only allowing more stock to be run, but also driving weight gains in cattle. 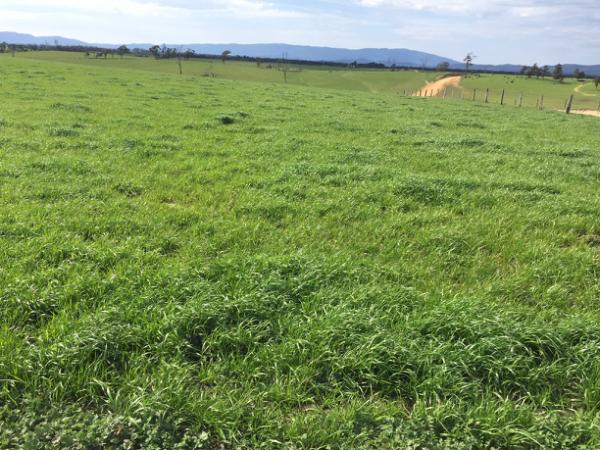 “We start seeding in mid-March through to the end of April each year and six weeks later we get our first grazing off it, depending on rainfall,” Alan says.

“It provides us with great, quick-growing winter feed, which is important for getting weight onto calves.

“Mach 1 keeps coming back, even after it dries off a bit – one of our paddocks which was chewed down fairly hard in late January 2018, received a shower of rain and it’s back to being green again - within a week it’ll be right to put another mob of cows on it.”

Success on the scales

Success on the scales

Perhaps one of the best indications of the success Alan has had with Mach 1 was with a mob of 30 export heifers he had to carry through the 2017 winter (June through to September).

“I weighed them before I put them on the Mach 1 and then once they came off and according to the scales, they were putting on 1.6kg a day through winter,” Alan enthuses.

“To me, that was amazing. I knew they were pretty good and they almost got to a point where they were too heavy for export, I couldn’t believe it.”

Alan has also had some success making silage from Mach 1, in 2017 yielding around 15 bales per hectare.

“We rotationally graze our autumn-calved cows and feed them Mach 1 silage every day,” Alan explains.

A key product for pasture planning

A key product for pasture planning

“The performance of Mach 1 has so far definitely warranted it remaining part of the program here on ‘Pepper Hill’,” he says.

“While most paddocks will be sown down to permanents after a couple of years, I will look at doing some area of Mach 1 every year as it provides good winter feed for fattening cattle.”