As a long-term certified seed producer, Stephen Eyles is a good judge of ryegrass varieties, so it’s significant he rates Thumpa tetraploid Italian ryegrass from Stephen Pasture Seeds as one of his best performers.

Stephen, who farms ‘Hillcrest’ at Selbourne in northern Tasmania, has grown and produced certified seed, including key Agricom varieties, for over 12 years on his 400-hectare mixed cropping property.

With ryegrass playing such a key role in the system on Hillcrest, Stephen has found through experience that effective varieties demonstrate a combination of palatability, nutrition and resilience, all of which Thumpa delivers on. 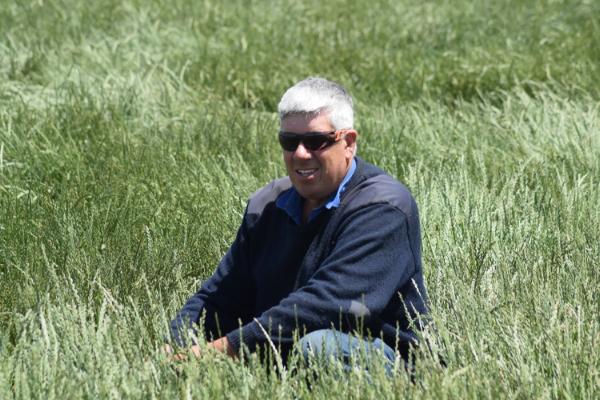 “We’ve been growing Thumpa for about five years now and find it extremely good,” he says.

“Since introducing it, we have incorporated Thumpa into our pasture system to diversify our feed wedge, maximising available feed all year round for our prime lamb operation.

“It offers exceptional winter growth - when most grass pastures go dormant, Thumpa continues to grow and has become an integral part of our prime lamb finishing system.”

Stephen says his ryegrass seed production yields are generally in excess of three tonnes of cleaned seed per hectare, with Thumpa being one of the best performers.

“I cut one field of Thumpa for silage in early October 2017, and it produced 10 bales per hectare (5x4 rounds). I then top-dressed it with fertiliser and irrigated it in, and after three to four weeks I had feed knee height, ready to go again.”

Stephen says Thumpa has also shown good persistence, with stands continuing to produce for up to four years of grazing on multiple occasions, with only marginal losses in feed quantity over that time.

“The biggest thing for me with the seed production process is that the crops produce a fair tonnage of raw material, whether it be seed or straw. The key then is to get it back into production again with fertiliser and irrigation,” he says.

“We've grown other varieties but in recent times Thumpa is performing well for us, it really does fit nicely into our program.”