Uplands cocksfoot (Dactylis glomerata var. hispanica) is a fine-leaved Mediterranean cocksfoot with a high level of drought tolerance and an ability to persist on acid soils. It is highly autumn and winter active, and in trials produced up to 13% more drymatter than Porto cocksfoot during this period (SPS Central Victoria Ground Cover trial, Natte Yallock 2009).

“After fire spread across much of our country during 2006, we have been working on improving our pasture base across these affected areas,” Matt explained.“Our perennial pastures have traditionally been phalaris based, with sub clover — but these are limited to our heavier soil types.

Although the phalaris has been great on our heavier soils, we haven’t had much luck getting perennials to persist on our lighter, buckshot country, which tends to be quite acidic — with a pH of about 4.2-4.5 in calcium chloride (CaCl2).

Our lighter country has been limited to lower-quality annual species where traditional perennials have failed to persist.” 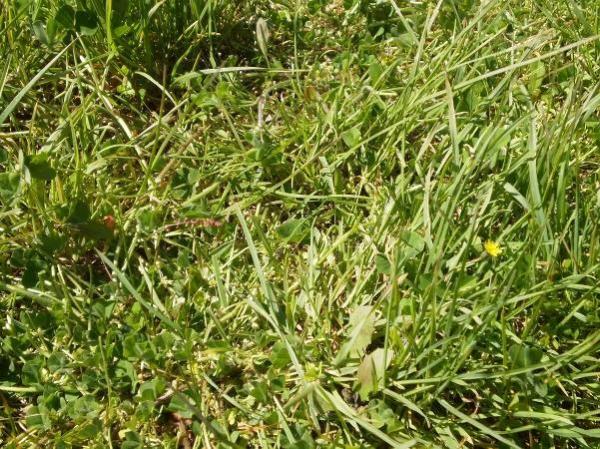 Following the 2006 fires, Michael was keen to set up a demonstration site on Matt’s property to investigate the potential for some newer perennial options, such as Uplands.  On the back of this site, and with his broader experience across the Western District, Michael encouraged Matt to try a pasture mix containing Uplands.

“We selected a 38 hectare paddock we had cropped under oats for two years, applied a knockdown spray for grass weed control during autumn and sowed a mix of Uplands cocksfoot Holdfast GT phalaris and Urana sub-clover in the first week of June 2009,” Matt said. “While the pasture was slow to establish, the results are still impressive seven years later. The phalaris has all but disappeared, but the Uplands has flourished.

At the time, because Uplands was so new, I threw phalaris in the mix as a safety valve.  But the Uplands is so good I wouldn’t hesitate to sown it on its own next time.

During the past few years we have been developing more heavy country with phalaris, but when we return to the lighter country we will go back to the Uplands and sub-clover mix.” For Matt it is this ‘survivability’ on his lighter country that has him sold on Uplands.

“This country is marginal perennial country, particularly with the seasons of the past few years — it has been hard to keep a perennial base, but the Uplands seems to be surviving and when we get the rainfall it thrives.

On the other hand, the paddocks either side, which were sown to traditional summer-active cocksfoot types have not done so well — one has disappeared and the other has declined significantly.
Because it is winter active (as opposed to the summer-active traditional cocksfoot varieties such as Porto) Uplands tends to shut down over summer, so it can hang on during the tough times.
In saying that, if we get a heavy storm during summer it will take off.  We had a wet January during 2011, 150-175mm over a fortnight, and it grew like mad. Even though it shuts down it will respond to summer rainfall if it occurs.”

As a more winter-active variety, Uplands allows Matt to build a wedge of feed leading into winter, which is proving valuable for his winter-lambing ewes.

“I try to keep stock off the Uplands during late autumn and allow the feed to come away after the autumn break — although this often does not come until about mid-May these days.
We lamb down on the Uplands during early June and it is set stocked at about 12–15DSE for 6–8 weeks. I try to get them off again for a month and go back into a strategic rotational grazing depending on the season.”
Matt grazes the Uplands reasonably hard during the tail end of spring and depending on the summer with his ewes, after weaning, and it may or may not carry stock again till early autumn depending on the season.
“We had sheep in there in late March and they came out at the first sign of rain to allow the feed to come away before winter,” Matt said.
According to Michael Grant, Matt’s experience with the cocksfoot variety is consistent with plant breeders’ expectations and recent feedback from other producers.

Matt Kindred, Stawell, Victoria is thrilled with the persistence, production and palatability of Uplands cocksfoot, which is providing a valuable perennial feed option across his lighter, more acidic soil types.